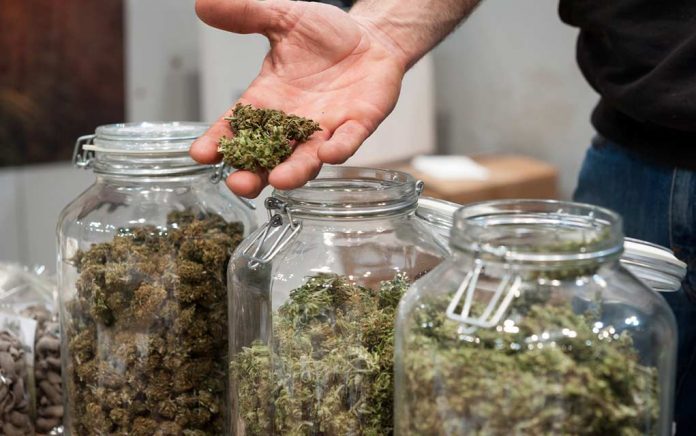 (WellnessPursuits.com) – It’s an ironic twist most of us never saw coming: THC, the psychoactive chemical in marijuana, which has a reputation for impairing the memory, might also ultimately save it. We’ve broken down the latest data to show you how the most unlikely of weeds could spare millions of people from the suffering of Alzheimer’s-related dementia.

Alzheimer’s is a progressive disease of the brain that leads to memory loss, changes in mood and disordered thinking. As the disease worsens, it can cause disorientation, paranoid beliefs and bizarre behaviors. It can also affect sufferers on a physical level, impairing their ability to walk, communicate and even swallow food. Alzheimer’s is the most common form of dementia, causing between 60% and 80% of cases, and it’s the sixth leading cause of death in the United States.

Alzheimer’s occurs because of inflammation and abnormal amounts of two different proteins, beta-amyloid and tau, building up in the brain. Beta-amyloid creates plaques between the nerves, making it more difficult for the cells to communicate, while tau builds up and forms tangles inside the nerves themselves. Until now, there hasn’t been anything doctors could do to prevent or slow any of these factors.

Marijuana on the Brain

Most of us associate marijuana with its characteristic “high” and related effects, but its medical benefits could be just as noteworthy. In addition to its ability to reduce nausea, increase appetite and protect against glaucoma and epileptic seizures, marijuana has also long been regarded as a sedative and antidepressant.

Marijuana also contains antioxidants with neuroprotective properties, making it a possible treatment for all kinds of neurological and neurodegenerative diseases. Recent studies have shown low doses of THC can reduce brain inflammation associated with Alzheimer’s disease. In addition, it can eliminate the build-up of beta-amyloid between the nerve cells. That’s right, marijuana can cut two of the three causes of Alzheimer’s disease, which is more than any other medication has been able to do.

No studies are currently available on marijuana’s ability to prevent Alzheimer’s, but some do exist on its use in managing the disease. For example, one study showed cannabis oil is safe and effective in reducing irritability, aggression, delusions and sleeplessness in established Alzheimer’s patients. Studies on mice have demonstrated THC’s ability to protect against Alzheimer’s-related neuron loss. As marijuana becomes increasingly accepted into mainstream medicine, preventative and long-term studies on humans are more likely to become available.

An article published this year in the Journal of the American Medical Directors Association examines the legal details of making marijuana an accepted medical tool in skilled nursing facilities. Its researchers believe policy changes to make marijuana an acceptable medication in such settings would vastly improve patients’ quality of life. Given the overlap in conditions marijuana is believed to treat, its use could reduce the burden of prescription medication use while increasing patients’ long-term mental stability.

Only in recent years have we realized just how beneficial one little weed might be. Once demonized as capable of stripping good people of all reasoning and sanity, marijuana could now be the best hope for millions of people struggling to keep their minds intact. Who’d’ve thought it?