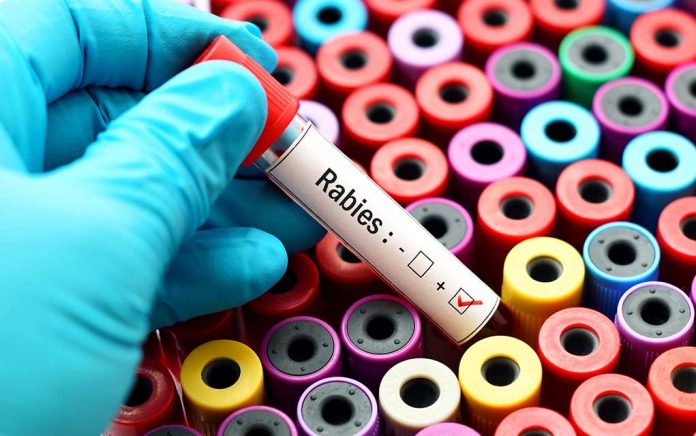 Summer is just about upon us, and we all know what that means — more time outdoors, enjoying nature. Of course, more time outside means more exposure to wildlife and the diseases they may carry. Human cases of rabies aren’t very common anymore, thanks to vaccinations, but they can and do still happen. In some cases, you may not even remember being bitten!

Believe it or not, anywhere from 30,000 to 60,000 people are exposed to rabies each year. The good news is, there are only one to three actual reported cases in the US annually. Approximately 65 dogs and 250 cats contract rabies each year, most after scuffles with wild bats, raccoons and skunks. These numbers would be even higher if it weren’t for our current, aggressive vaccination programs.

What Happens If You Have Rabies?

Rabies symptoms tend to manifest a lot like the flu, with anywhere from two weeks to three months between exposure and symptoms. Once symptoms do appear, they progress rapidly. Some of the most common include, anxiety, confusion, agitation, sleeplessness and abnormal behavior. As things progress, they may begin to have delusions, hallucinations, and muscle spasms. Many try to avoid the wind or water and some progress to paralysis and coma.

Sadly, once the infection reaches the brain, it’s almost always fatal. There have only been 10 known survivors of rabies infections, eight of whom had been immunized in the past. The other two needed to be placed in medically-induced comas to allow their bodies to heal.

How is Rabies Transmitted?

Most people think rabies is only transmitted by the bite of an angry, or “rabid” animal. The truth is you can also catch it if an infected animal’s saliva gets into your nose, mouth, or eyes. That means even scratches could be dangerous, since most animals groom themselves with their mouths. The upside is that simply petting a rabid animal, or coming into contact with blood or fecal matter, will not transmit the disease.

Rabies may be a lot rarer than it used to be, but we still have to be careful. Please see your doctor right away if you think you were in contact with a rabid animal. The sooner you seek treatment, the easier it is to stop the disease in its tracks.